George Alexander Munro was born on February 4th, 1900.  He was the sixth child of Alexander and Janet Munro, and from an early age he was extremely intelligent, curious and overflowing with fun.  Of all the Munro children, he had perhaps the highest understanding of “quality of life” and he lived his life a way that allowed him to enjoy every day to the fullest.

Like his siblings, George grew up on the family farm and on the waters of Port Orchard Bay.  He attended Crystal Springs School, walking the mile or so to school with brothers, sisters and neighborhood kids.  Later he attended Queen Ann High School in Seattle.

As teen years turned to 20’s George went to work in the Puget Sound Navy Shipyard in Bremerton where he apprenticed to become an electrician.  He and some buddies got tired of commuting by rowboat, so they lived in a tent in Manette.  They hiked on Mount Rainier, joined the Masonic Lodge, organized an Apprentice Football team and chased girls.  Some of the ladies “chased back” as well.  Referring to George’s red hair, one girl wrote “Dear Carrot-top, it must be so cold in that old tent.  Why don’t you come to my house where it is nice and warm!”

George earned college money by putting electrical wiring into many Island homes – their first electric lights.  He used the money to attend Washington State College in Pullman and was a “Cougar” for the rest of his life.

Betty Troll came to the Island to teach school in the early 1930’s.  She married George and they raised three children together, David, Ronald and Ralph.

For many years George’s consuming hobby was his wooden cabin cruiser, the Driftwood.  He built the Driftwood there on the beach in front of his home, from mostly salvaged materials.  When the project was finished, he and Betty enjoyed cruising the waters of Puget Sound and the San Juan Islands with family.  George was devastated when Betty died suddenly in 1962, and he never again tinkered with the Driftwood.  It has aged in place on the beach at Crystal Springs ever since.

In his later years, George was a curious enigma to some.  He lived a very self sufficient life in his little house on the beachfront.  When a log washed up on the beach he would quietly tie  or chain it in place.  Later he would pull any nails and salvage them to use later.  Then he would saw up the log to burn in his wood cook stove.  He would go fishing in his rowboat nearly every day the weather allowed, with  fishing line wrapped onto a piece of salvaged board that he held in his teeth while he rowed.  Dinner was usually fish.  Often it was clams from the beach.

None of us realized at the time, but George was primarily responsible for the great clamming on the Munro beach – quietly ridding the beach of the Moon Sails that decimate clam populations.  At the same time, he would clean the beach of trash and he was always scouting for driftwood or other treasures to be stored here or there for later use.  Some of the newer neighbors would worry about him if the power went out in the dead of winter. But when they stopped by, they would find him reading in a warm living room heated with a gravity fed oil stove – far more comfortable than his neighbors.

George passed away on February 14th, 1999 at the age of ninety-nine. 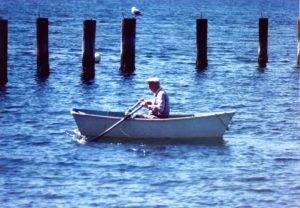 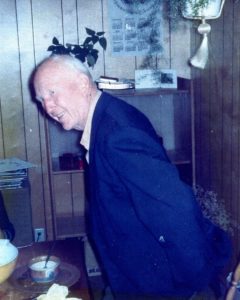