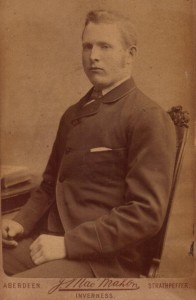 Alexander McKenzie Munro was born October 7, 1862  at Pealaig cottage, Fyrish Farm, near Dingwall, Ross-shire, Scotland. He was the first child of John Munro and Annie McKenzie.  As a boy he apprenticed to become a stone mason or stone cutter, and for many years he worked on Lord Lovat’s Estate (Beaufort Castle) in Beauly, Scotland, while he learned his trade.  Later he worked on jobs near Sterling and Glasgow.

In the spring of 1887 Alexander left Scotland with a group of other young stone masons looking for a new life in America.  They worked their way across the country taking jobs in Texas, Kansas and Utah.   He became a Naturalized citizen in Smith Center County, Kansas, on November 6th, 1888.

Together with Peter McDonald, Donald McRae and others, Alexander arrived in Seattle shortly after the great fire of 1889.  In response to the fire, a law had been passed requiring that the exteriors of all new buildings be made out of fire proof material such as brick or stone – – – suddenly Stone Masons were in high demand.

As Alexander and his friends travelled west, they searched for ‘the best place to settle’ and build a new life.  In Seattle, they took jobs building the beautiful new Bailey Building [now called the Henry Broderick Building] at 2nd and Cherry.  From high on the scaffolding they looked out at Bainbridge Island and wondered if the cliffs north of the Port Blakely mill were stone.  On a Sunday afternoon, they rowed across to Bainbridge and found the cliffs to be clay.  They wandered into Murden’s Cove and walked up the creek.  It was here they saw everything that they wanted; fertile land, deer to hunt, fish to catch, timber to build a home.  But as the afternoon lingered on, they realized that the East Side of Bainbridge was shady and dark in the late afternoon. They wanted sunshine.

The following week, the friends again rowed across, but this time they went up through Rich Passage and landed at Nibbeville [Later Gibson’s Landing and then Crystal Springs].  It was here that Alexander found fertile land, streams and forests abundant with wildlife, timber  . . . and sunshine late into the evening.  He wrote to Janet Montgomery in Scotland and asked her to come and marry him.  She arrived after a long trip across the Atlantic, two nights in New York City, and a lengthy train ride across America with the Dickson family.  They were married in Seattle the next day, October 2nd, 1890.   Their first home was at 610 John Street, Seattle, which is about 4 blocks east of where the Space Needle is located today.

Alexander and Janet spent their first Christmas together at the Charles Lindquist home at Nibbeville.  The Lindquist house still proudly stands next to the parking area at the Point White community dock.

On December 31st, 1890 they purchased seven acres at Nibbeville (now Crystal Springs) on the west side of Bainbridge Island for $700.  Nibbeville was established by Civil War Congressional Medal of Honor Recipient John Nibbe.

They lived temporarily in the ‘old Pederson house’ that was on their newly acquired property but soon started work on construction of a grand farmhouse to raise a family.

Their first child, John Montgomery Munro was born September 12th, 1891.   He was followed by Duncan in 1892, William Francis in 1893, Ann Janett in 1895, Mary Victoria in 1898; George Alexander in 1900, Euphemia in 1904, Isabel in 1906, Gordon in 1908 and finally James in 1909.  Alexander was a stern and loving father who cherished his children.  In the evenings, after a long day at work, he would knit for Janet and the children while keeping his hands from becoming stiff from the heavy work.  He and his sons actively farmed the Crystal Springs property raising chickens, pigs, potatoes, strawberries, and much more to feed the family and sell in the Munro store.

For several years Alexander and his friend, Donald McRae, worked together as Cut Stone Contractors.  Their business was located at the corner of South Sixth and Dearborn Streets, Seattle.

Alexander worked stone masonry jobs all around the Pacific Northwest to support his family.  In Canada he worked on the Parliament Buildings, the Empress Hotel and some of the most prominent homes in Victoria, British Columbia.  He also worked on New Dunsmuir Castle in Hatley Park (near Victoria) and the government buildings in New Westminster, British Columbia.  In Alaska he built the Indian Mission at Haines.  In Washington State he worked on the Bailey Building in Seattle, Dry-dock Number 2 at the Bremerton Shipyard, the first large Seattle Public Library, the homes for the mentally ill in Steilacoom (Western State Hospital), Old Main Building and Canada House at Bellingham Normal School [now Western Washington University], the fireplaces at Paradise Lodge and the shelters at Camp Muir inside Rainier National Park, the stone pillars on the Second and Marion Building in Seattle, Thornwood Castle at American Lake, and many, many more. His crowning achievement was the stonework on the Washington State Capitol in Olympia. Please see the Family Historical Sites page for more information on Alexander’s job sites.

Alexander lived a long life, but his lungs were damaged by the years of breathing stone dust.  He died on November 23rd,1933 at the Crystal Springs home.