Our family story begins with Janet Montgomery and Alexander McKenzie Munro, two young people in Scotland who fell in love and decided that America would be a better place to live and raise a family. They left their homes, their families and everything they knew and made the journey to America by steam ship. Alexander came first, in 1887. At that time the United States was growing fast and almost every town was building a new church or a new courthouse. The railroads were expanding across the country and towns were relocating to be next to the railroad lines. Alexander was a Stone Mason, a highly skilled construction worker specializing in the finest building material of the times. He was nearly six feet tall with broad shoulders, strong hands, a keen, intelligent mind and a tendency to be strong willed. He planned to work hard, save his money and find the perfect location for he and Janet to make their home.

Alexander was twenty-four when he left Scotland. Janet was seven years younger. She had finished school at the Claggen School near her home on the Morvern Peninsula (western islands or Inner Hebrides) and was working as a teacher. Alexander wrote to her every month and she was saving her money for the day when she could follow him.

Of course, Alexander and Janet are not the very beginning of our story. They were part of an ongoing and beautiful epic, as are you. They were born in unique and challenging times, in a rapidly changing world, as were you. And just like you, they were standing on the shoulders of greatness, benefitting from the hard work, courage and intelligence of their parents, grandparents, and great-grandparents. 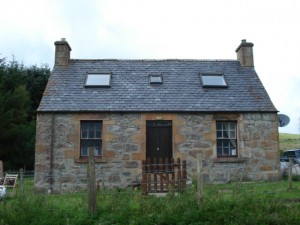 Alexander was part of the great Clan Munro of Scotland. He was born on October 7th, 1862 at Pealaig Cottage, overlooking Cromarty Firth and the Black Isle. He was the oldest child of John Munro and Annie McKenzie Munro. As a boy he apprenticed to become a stone mason or stone cutter, and for many years he worked on Lord Lovat’s Estate in Beauly, Scotland, while he learned his trade. Later he worked on jobs near Sterling and Glasgow.

In the 11th century Clan Munro was granted lands in Ross, where Kiltearn and Alness are located today, as a gift from the King for their services in helping to drive out the invading Vikings. Over the centuries Munro Clansmen were legendary soldiers who were prized as officers in the Black Watch (Royal Highland Regiment), the Swedish military and others around the world. As an acknowledgment for military services to the Crown, men with the sir name of Munro are permitted to wear either the Black Watch tartan or the Munro tartan.

Life was harsh in the highlands of Scotland where it was very isolated from the rest of the world, and on the same latitude as Alaska. But the Clan Chief looked after his people like a father with a large, communal family. That changed dramatically in the 1700s. The British government had been involved in Scotland, but in the background. In the 1700’s it began taking firm steps to assert British rule. Clans like the Munros, who had close ties to the British military, knew they had no choice and that perhaps their lives would be better. Other clans decided to fight the British. The war that followed was known as the Jacobite Rebellion. Bonnie Prince Charlie was believed to be the heir to the Scottish throne, and a Catholic living in exile in France. The French government gave him a small amount of support, and he was able to unite the Catholic Clans to fight the British. For the most part, the Protestant clans sided with the British. The final, bloody battle of the Rebellion took place in 1745 at Culloden, east of Inverness. Clan Munro fought beside the British. If you visit Culloden today, you can see where each of the Clans assembled. You can stand where your Munro ancestors stood at early dawn on a cold, foggy morning waiting for the battle to begin.

After the Jacobite Rebellion life changed dramatically in Scotland. Wearing the tartan (like gang colors) was banned. The British government took over the duties of the Clan Chiefs, but of course like a government, not like a loving father. At about the same time, there was a movement far to the south in England to fence in or enclose lands that were owned by noblemen but were used by the peasants to graze their farm animals, grow crops or hunt for food. The noblemen decided that they could make money farming the common lands, so they built stone walls and fenced the “Commoners” out. That took away a huge amount of independence and self sufficiency from the peasants. They were now dependent on wages alone for their living and the noblemen set the wages. 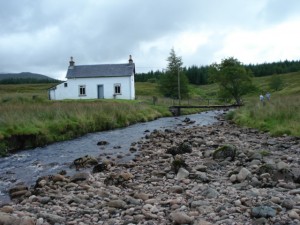 At about the same time, in the Western Islands (Inner Hebrides) many peasants lived in communal villages on the great estates that were owned by English noblemen. Families often lived in rough, one room, stone houses with a hole in the thatched roof for the smoke from a peat fire to escape and chickens roosting in the rafters overhead. They might have raised a cow and grew potatoes. Many families had lived as tenants on the same land for generations. The landowner or Land Lord looked after them in a rough sort of way. But in the late 1700s and throughout the 1800s there were huge social and economic changes in Scotland, the population of the peasants grew while the economics of owning an estate became more challenging. This caused the Land Lords to begin thinking about how to make more money from their lands. The estates were too large to enclose. So starting in the late 1700s the Land Lords began evicting families from the best land. They forced the people from their homes and tore down the buildings. Families were forced to move to less fertile ground, to cities like Glasgow to work in the factories, or to emigrate to other countries. Many families chose to move without being evicted, and the population of the Isle of Mull and the Morvern Peninsula decreased by 85% between 1775 and 1850. While the common people moved on, sheep were moved in and the large estates became sheep ranches managed by lowland Scots with their whistles and dogs. This era was called the “Clearances”.

Janet Montgomery’s mother, Mary McKinnon MacCallum, was born on the tiny island of Ulva northwest of the Isle of Mull, near the beautiful and holy Island of Iona. Most of the people who lived on Ulva were forced out during the Clearances. For unknown reasons, Mary and her family were not. Mary’s mother was a McKinnon and in the 1400’s Lachlan MacKinnon was a Clan Chieftain who controlled the waterways near Iona and Ulva. Is it a coincidence that Mary named her son Lachlan McKinnon Montgomery?

Janet’s father, John Montgomery, was a lowland Scot from Hutton (near Boreland, north of Lockerbie). John was a skilled and educated agricultural manager in a high demand field. He was a Sheppard. In about 1848 he was hired by the Ardtornish Estate on the Morvern Peninsula. You can read about his life and how he came to Alltaechanaich (all-TA-han-ick) in Ralph’s Book. Soon after he arrived he met Mary MacCallum. They were married on June 6th, 1848 at the Salen Hotel near Tobermorry and lived much of their lives in the little cottage at Alltaechanaich. 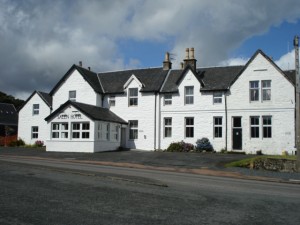 The Salen Hotel is still in business and you can stay there if you have a chance to visit the Isle of Mull.The cottage at Alltaechanaich is also still standing and owned by the Ardtornish Estate. Sheep are still the primary residents of the region.

In the British Empire the government did not provide schools. So for hundreds of years, if a family wanted their children to have an education they had to hire a teacher or be able to pay to send them to a “Public” school (paid for by the public not the government). In Ireland that meant that only children from wealthy families knew how to read and write. In Scotland it was different. The Church of Scotland establish a school in every parish and every child had a chance to become an educated person (even if it meant walking five miles or more to school each day). With an education the child of a peasant could decide their own destiny. The Scottish people became known as intelligent, hardworking and educated, and they were welcome all over the world. While immigrants from Ireland and similar countries had to work much harder to gain respect and prove their value – they had to pull themselves up by their own boot straps. By the time Janet Montgomery was growing up, the British government had finally establish schools for everyone. But even today the Scottish people, and our family, place a very high value on education.

Janet’s family must have been very proud to have her become a teacher. They must also have been very happy that she was going to marry such a good, hard working man, and move to a country where life wasn’t as harsh. A country where, if they worked hard enough, they could own their own home and a place where the government was there to benefit the people, not the other way around.

Alexander left Scotland in 1887. We know that he was in Glasgow on March 4th, 1887 and then in Horton, Kansas on April 6th, 1887. Unfortunately, we have not yet been able to learn what ship he travelled on or what route he followed. Perhaps he landed in New York or perhaps Galveston? Ralph Munro is in the process of writing a second book that will tell you a little more about Alexander’s travels in America.

Janet followed Alexander in 1890. She was almost twenty. She left Glasgow on the Steam Ship Anchoria on September 12th and arrived in New York on September 22nd. Then she travelled by train to Seattle, Washington. She and Alexander were married in Seattle on October 2nd, 1890.

On December 31st, 1890 they purchased seven acres at Nibbeville on the west side of Bainbridge Island for $700. Nibbeville was established by Civil War Congressional Medal of Honor Recipient John Nibbe. He personally brought Janet Montgomery Munro to her new place of residence just north of Point White, on Bainbridge.  They lived temporarily in the ‘old Pederson house’ that was on their newly acquired property but soon started work on construction of a grand farmhouse to raise a family. Their first child, John Montgomery Munro was born September 12th, 1891. He was followed by Duncan in 1892, William Francis in 1893, Ann Janett in 1895, Mary Victoria in 1898; George Alexander in 1900, Euphemia in 1904, Isabelle in 1906, Gordon in 1908 and finally James in 1909.

Janet and Alexander’s story continued as they raised their ten children at Crystal Springs, and it continues today with you.