The first time Alexander Munro visited Bainbridge Island, he and his friends explored the east side of the island near Murdens Cove and Port Blakely.  They were hopeful that the cliffs they saw from Seattle were stone but the hillsides all turned out to be clay. They walked up a little creek and saw ducks, deer, salmon in the creek, and a pheasant. These were all the things that only the ‘rich people’ in Scotland were allowed to harvest and enjoy.  They were smitten with the Island, but the sun dipped over the horizon about 3 pm in the afternoon.

On their second trip they rowed through Rich Passage to Point White. Looking North on Port Orchard Bay, they found lands that were very similar to their hometowns in Scotland.  Low sloping property with lots of afternoon sunshine.  Rounding the point, they rowed north with the incoming tide and found Nibbeville.

According to Picture Bainbridge, A Pictorial History of Bainbridge:  The point’s first [European] resident arrived in 1880.  Jack Nibbe [John H. Nibbe], Civil War Veteran and recipient of the Congressional Medal of Honor, paid a $10 filing fee for a general homestead allotment of 160 acres, and $1.25 per acre for an additional 5.5 acres. Nibbe…built a store just south of what later became the Point White community dock. …He divided his property and began to bring new settlers from Seattle in his little sloop to buy “west-side waterfront with plenty of sun to grow a garden.”

Alexander and his friends (Peter McDonald and Donald McRae) might have found Nibbe’s store, a lean to type structure behind where the Lindquist house proudly sits today.  They certainly found a picturesque waterfront overlooking Port Orchard Bay.  Along the beach was a wide bench of land perfect for beachfront homes.  Then the landscape sloped up to a second tier of pristine farm and timber land.  Sunshine, fertile soil, wild game, a view to die for and relatively easy access to Seattle.

As the tide changed, they hurried back to their rowboat to ‘catch the current’ through Rich Passage.  Sliding their rowboat down the beach, Peter McDonald fell and broke his ankle.  It was a painful row back to Seattle for Peter.

Alexander Munro and Peter McDonald were both convinced that this was a place where they could live out their lives and die happy.  They were right.  Within a short time both men had purchased property at Nibbeville, a half mile or so from each other.  Over the years their dueling bagpipes could be heard for miles.

When the Navy announced that Bremerton would be the site of a new United States Naval Shipyard, Jack Nibbe moved to Sidney and opened a store there.  He was the first merchant in the Bremerton area and the name Nibbeville faded into history on Bainbridge Island. 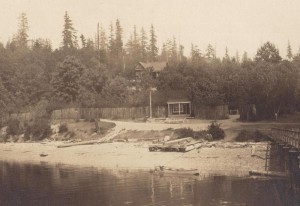 It was 1890 when Alexander and Janet Munro bought their seven acre farm at Nibbeville and began raising their family.  Neighbors included Native Americans who often camped on the beach in the summer and the Lindquist family, among others.  Alexander and Janet spent their first Christmas with Charles and Charlotta Lindquist, and they remained friends for life.   The Munro kids grew up with the two Lindquist boys, Charlie and Bert.  They also grew up with the Native American children.  While they weren’t close friends, they were cordial neighbors ready to help each other when in need.  Janet Munro had been terrified of the “wild Indians” when she first came to American.  But she was an intelligent woman and soon saw beyond their differences.  And she was quick to help when a native woman brought her a sick baby.  Janet warmed, fed and cared for the child until it was well.   Jack Nibbe’s first wife, Jenny Nibbe, was Native American; and they had two children, Jefferson and Archie. It was tragedy for the whole community when Archie Nibbe drowned in the bay in front of their home. He was buried in a little graveyard behind the Lindquist’s home.

In 1897 Marie Hansen and her six children arrived from Norway.   Her son William and his wife Hilda purchased the ten acres south of the Munros and the two families have been close friends and neighbors ever since. The Munro children grew up with the Hansen children, Harry, William (Willie) and Jeanne.  A generation later a Munro grandson, Bill Dunn, married a Hansen granddaughter, Sally Warberg.

The notorious “Colonel” Warren Gazzam arrived in 1904 and built the 6,000 square foot Gazzam mansion a mile or two north of the Munros.  Gazzam was a member of Seattle’s prestigious Rainier Club.  On spec, he divided 500 acres of beachfront property and marketed it to his Rainier Club friends.  They were called ‘pencil estates’. 100-200 feet of waterfront and the properties ran 1500 feet or more inland. Long and Narrow.  The resulting neighborhood of upscale summer homes was called Westwood.  Some of Seattle’s wealthiest people moved in for the summer months.

At about the same time, Captain James S. Gibson purchased property immediately north of the Munros and built a beautiful waterfront home.  It’s likely that he was the same Gibson who owned the powerful Washington Stevedoring Company headquartered on Pier 6 in Seattle.  Sometime between 1905 and 1910 he constructed a pier in front of the Hansen property.  Now, rather than having one of the kids row you out to “meet the boat”, neighbors from miles around could pay a small toll and board the boat directly from the pier.  The pier itself was called Gibson’s Landing and the neighborhood soon took on the name.

At this time the Munro family and farm were percolating.  With ten kids at home, the farm was in full swing and the family was selling produce, eggs, chickens, etc to their neighbors and purchasing bulk quantities of the things they couldn’t make or grow.  Shipments were coming directly to Gibson’s Landing and soon the family opened a small store, run primarily by Bill and Duncan Munro. 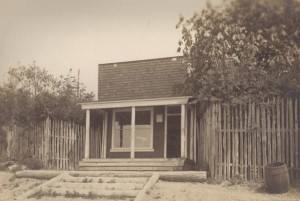 The Munro Store operated for a number of years. They featured hay, grain, groceries and ice. People would leave their order at the store in the morning before they boarded the boat for Seattle.  The groceries would be delivered to their home or be ready for pickup when the boat arrived back from Seattle in the evening. There was little or no noise on Port Orchard bay in those days.  On calm and clear days, neighbors across the bay would sometimes call across for ‘eggs or bread, or ice.’  It would be delivered by rowboat.

Then, in the early 30’s George Munro married Betty Troll, the new school teacher at Pleasant Beach. They added on to the little store building and converted it to a home.  Their three sons, David, Ronald and Ralph were raised there and it remains in the family today. 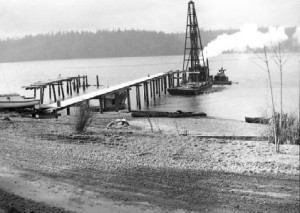 In 1935, after the original Gibson’s Landing pier was heavily damaged in a storm, George Munro had a new pier constructed next to the old, and shipyard workers like George continued to catch the boat to Bremerton at Gibson’s Landing.  Workers added a nickel to the boat fare to help pay for the dock. The pilings of the first and second pier remain today.

Throughout much of this history, Crystal Springs was the name of an area at the end of the Crystal Springs road on or near property owned by Warren Gazzam. There were several natural springs and the Ninninger family built glass green houses that were watered from the springs.  For many years, when heavy snow fell, the neighborhood kids would hightail it to Crystal Springs to help clear snow from the greenhouses.  Eventually, with time and tide, the entire stretch between Point White and Westwood became known as Crystal Springs.