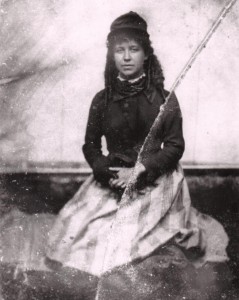 Janet Irving Montgomery was born October 26, 1870, at Oban, Scotland and was raised at Alltaehanaich on the Morvern Peninsula.  She was the ninth child of John Montgomery and Mary McKinnon MacCallum.  Janet grew up in the isolated and beautiful Western Isles where her mother’s family had lived for generations.  It was a six mile walk to the town of Lachaline where she attend Claggen School and worshiped at Kiel Church. She and her brothers and sisters played among the sheep on the wild, windswept hills of the Glen Geal Valley and cut peat from the hillside to heat the little cottage of Alltaehanaich. 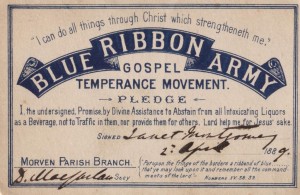 In the 1880’s the Temperance Movement was gaining momentum.  Janet became a member of the Blue Ribbon Army in April of 1889.

In 1887 and 1888 Janet taught school in the town of Strontian (STRON-tee-an) to earn money for the trip to the United States.  Alexander would write to her every month and tell her about Kansas, Texas, Mexico, Utah, Idaho or wherever he was working or visiting.  When he discoverd Bainbridge Island in Washington Territory, he wrote and told her that he had found the perfect place to make their home.

Janet bought her tickets on the Steam Ship Anchoria and said goodby to her dear parents and her brothers and sisters.   It must have been particularly hard for her to leave her sisters, Mary and Euphemia, and the brothers she was closest to, Thomas, Lachlan and William. Her older brothers, John, Duncan, James and Donald had long since moved away from home and were raising families of their own.  Before she left for America, her minister gave her two letter to carry with her. The first attested that she was a healthy person of good character.

“I herby certify that Janet Montgomery is well human one.  Her parents are well respected in the Perish and she herself has always born an excellent character.  Last July she was admitted by me to church membership.  Donald McFarlane, Parish Minister.  Morvern House, 31st August 1890. “

Janet followed Alexander to the United States in September of 1890.  She was almost twenty.  She left Glasgow on the Steam Ship Anchoria on September 11th or 12th.  The Anchoria spent one day in Moville, Ireland, loading additional passengers, then steamed toward America.   During the passage Janet tracked the distance travelled on a Tracking Chart and she started a diary of her trip, but was too busy to keep it updated.  One evening during the passage the Second Class passengers entertained each other with a talent show and Miss Montgomery recited the poem Bingen on the Rhine by Caroline Norton.

Janet arrived in New York on September 22nd, 1890 and was met by a member of the Dickson family carrying a letter from Alexander introducing her to the Dickson family and suggesting that she travel west with them.  Bella Dickson immediately sent a telegram to let  Alexander know that Janet had arrived safely and that they would leave New York on September 24th.  Then Janet, Bella and the Dickson children travelled by train to Seattle, Washington Territory,  arriving on October 1st.   Janet and Alexander were married in Seattle the next day, October 2nd, 1890.   Their first home was at 610 John Street, Seattle, which is about four blocks east of where the Space Needle is located today.

Janet and Alexander spent their first Christmas together at the Charles Lindquist home at Nibbeville.  The Lindquist house still proudly stands next to the parking area at the Point White community dock. On December 31st, 1890 they purchased seven acres at Nibbeville (now Crystal Springs) on the west side of Bainbridge Island for $700.

Nibbeville was established by Civil War Congressional Medal of Honor Recipient John Nibbe.  He personally brought Janet Montgomery Munro to her new place of residence just north of Point White, on Bainbridge Island, together with her new furnishings.  She and Alexander had just purchased a parlor set, an oak desk with matching library table, a Singer treadle sewing machine and a variety of pots, pans, buckets, brooms and other household items.

They lived temporarily in the ‘old Pederson house’ that was on their newly acquired property but soon started work on construction of a grand farmhouse to raise a family. Their first child, John Montgomery Munro was born September 12th, 1891 in the old Pederson house.  He was followed by Duncan in 1892, William Francis in 1893, Ann Janett in 1895, Mary Victoria in 1898; George Alexander in 1900, Euphemia in 1904, Isabelle in 1906, Gordon in 1908 and finally James in 1909.

In the first ten years or so of her marriage, Janet would pack up the household and move with Alexander to wherever work would take him, from Olympia to Victoria. After their sixth child was born she hurt her back during a move.  After that, she stayed at the Crystal Springs home full time while Alexander moved to the different job sites and travelled home on weekends. Her life was devoted to raising her children. In the early years she managed entirely without electricity or running water. She cooked and heated the home with a coal stove. There was a well and hand-pump just outside her kitchen door, and an outhouse about 100 feet behind the house.

Janet lived a long and healthy life and absolutely cherished her many grandchildren and great-grandchildren.  She died at the Crystal Springs family home on December 13, 1952.